My Biggest Fans Call Me “Pop”

When my new novel (Head Shot, the second in the Marko Zorn series) was published last December, my family was once again called into action. They are all far too cool for exuberance: no confetti, no balloons. They are used to my foibles so no eye rolling either. At least not in my presence. They all know by now I was never cut out to spend my golden years on my front porch in a rocking chair. I don’t even have a front porch. Nor a rocking chair.

I suppose my family is used to my eccentricities by now and are not surprised by anything I do. They traveled with me during my career in the Foreign Service and my children (two sons and two daughters) grew up in such disparate locations as Syria, Yugoslavia, Iceland and East Germany. Even when the lives of my kids were disrupted by living abroad in countries with other languages and customs, dealing with new schools and having to make new friends, they were always troopers. Their mother and I always supported them and instilled sound values.

When I served in Berlin, we found ourselves living in a police state. Our home was kept under surveillance and our phones were tapped. It never bothered me that they were scrutinizing our conversations. They would have spent a lot of time and resources listening to playdate arrangements for my children. The kids went to school in the Western Sector of Berlin and that meant they had to pass daily through the checkpoints. These heavily garrisoned crossings filled with armed guards never phased them at all.

The children managed to survive my later period as a playwright without complaint, even attending performances of my work in Washington and New York. They were too young to witness the time when I was taking flying lessons, planning to get my pilot’s license. Then there were my piano lessons. The less said about that the better. And there were several years when I took up painting. I once created a dozen paintings in the style of modern masters that were used on the set of one of my plays.

When my first thriller in the Marko Zorn series (The Reflecting Pool) was published my family was understanding and helpful, pitching in when they could. My two sons, who live in Washington DC, delivered signed copies of my books to local bookstores. One of my daughters is a member of a book club and arranged for The Reflecting Pool to be picked as one of their selections.

My family is happy with my new career as a thriller writer and I’m confident they will continue to be patient and supportive of any future endeavors as long as I don’t go over the deep end and take up skydiving or square dancing. In which case there might have to be a family intervention. Now, in my eighth decade and into my next chapter, my kids are here for me, ready to jump in with help and encouragement. Just as they could always count on me, I can always count on them. 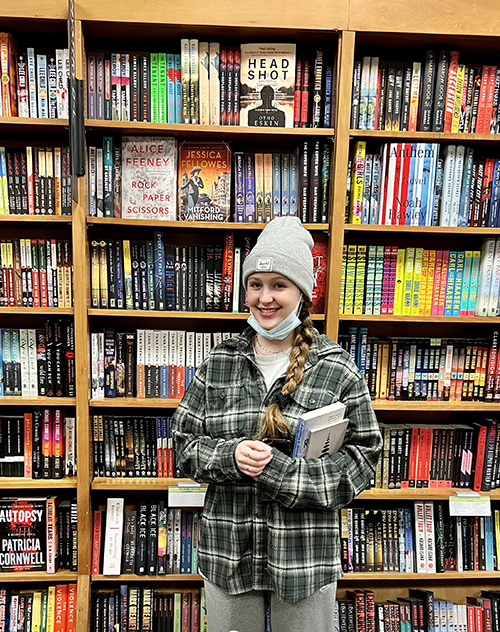 Author Otho Eskin’s granddaughter shopping the shelves for signed copies of Head Shot at DC’s flagship Politics and Prose. Drop by or give them a call @ (202) 364-1919. Hurry! Quantities are limited